At home on the Island of Reichenau

A press article from 2011 describes Alfred Heizmann as a real Alemannic character and the incarnation of a Baden soul with heart and intellectual wit. With his earthy and often coarse Reichenau dialect, he brings his audience to really burst out laughing.
With his competent knowledge, spiced with humour and the consciousness of human inadequacies, the word and linguistic artist who lives on Reichenau, well-known from the televised carnival in Constance, gives an insight during his guided tours over the island into the development of the Monastery Reichenau, which was one of the three most significant centres in Europe, thanks to its scientific work and knowledge.
When approaching the local history museum, one sees the modern UNESCO building, in which the development of the monastery is shown, because on 30th November 2000 the “Monastery Island of Reichenau” in Lake Constance was included in the world heritage list of the UNESCO as a cultural region, which portrays excellent testimony to the religious and cultural role of a large Benedictine monastery in the Middle Ages. The three well-preserved Roman churches on the island are good examples of the architecture of monasteries from the 9th - 11th century, and not only the Ottonic wall paintings in the church of St. Georg show the Reichenau as a significant artistic centre for European art history of the 10th and 11th centuries. For example, book paintings achieved a unique level of perfection, which even today after 1000 years gives the viewer a feeling of true reverence. The monastery era has influenced the image of the island, its landscape and economic structure sustainably right up to the present day. In the centre of the island the Minster St. Maria and Markus are to be found – surrounded by the old monastery complex. Here several architectural styles are united to form a harmonic entity: The east Carolingian transept, the Roman Markus church with its Moorish elements, the Norman nave and the originally preserved roof structure, whose construction is similar to that of an overturned ship, as well as the Gothic choir area with its Baroque choir screen. During the tours, the eyes of interested guests will not only be opened by this interplay of architectural epochs but also the door to the treasure chamber, which contains the original handwritten documents of the monastery, amongst other things, as well as the Markus shrine and numerous sacral objects, crafted by master goldsmiths.
A speciality of Alfred Heizmann’s tours is the church of St. Peter and Paul, which is situated at the end of the island. Although it has always been overshadowed by the other two churches, a unique history can be learned here, since it is actually the “origin” of Reichenau with its consecration dating back to anno 799.
“On the Island of Reichenau, one experiences at close quarters the unique history, which is harboured in our immediate surroundings and the four-country region around Lake Constance”, according to Heizmann. “The special part about the people here and our region is that we are all Alemannes. We are united by a mutual language and cultural density and richness, which cannot be found anywhere else. Nowhere else can more cultural heritage (literary, architectural, musical) be actually found.” 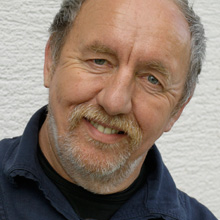 Has lived on Lake Constance since 40 years

Restaurant Tip: Eat oxen ‘fetzt’ in The Hirschen in Horn with a dry wine from Reichenau

Cultural Tip: Municipal theatre in Constance with all stages

„Anyone who wants to move something cross-border can inform himself or be advised at the IBK about possible cooperation partners or subsidies.“
Klaus-Dieter Schnell, 49

„Give in to temptations. Who knows if they will ever come back, Oscar Wilde“
Dieter Bachmann, 41