The art of a good neighbourhood

Since 2006, the saying "Art opens up borders" applies. At that time, the Lake Constance region was moving just a little bit closer together: On 16th August, the fence which marked the border in the Little Venice area between Constance and Kreuzlingen was removed.
The internationally renowned artist Johannes Dörflinger, who grew up not far from the border, created 22 eight-meter high sculptures, which since 2007 have been used to mark the former border as 3-dimensional art. Art has opened up borders and keeps them open, right up to the present day.
"The art border was only possible at that particular time," said Dörflinger at its inauguration. "Everything was just perfect: the particularly good relationship of the two mayors to each other, the convergence of Switzerland within Europe, symbolic thinking, which today is much more pronounced." And in today’s day and age? He would build the art border today in just the same way, the artist emphasized.
Recurrent themes in the work of the artist are the tree, bird, mountain and the Tarot. Also, the landscape work of art of the art border deals with motifs of the Tarot. "My conflict with Tarot has nothing to do with esotericism and fortune telling at all. Basically, I chose my subject to represent the opening up of limitations and to overcome these using playful elements", stressed Dörflinger. On the contrary, he was more interested in the Tarot in its original form as a carrier of old wisdom and human desires. If one gets up to go to this place, strolling between the sculptures – one foot on German, the other foot on Swiss ground – food for thought is given, and one is invited to make associations. You must just have to be willing to allow it. The work of art is thus seen in the eye of each beholder. Or to put it another way.
This openness in the discussion first becomes interesting with the transitional situation of the place. This is where neighbours come together and with them preferences, views and worlds. They mix and blend and make something new, something quite different. Constance is located in the heart of Europe, is nevertheless right on an outer border of the EU. This leads to a number of challenges, but also to at least as many opportunities. And taking the bird's eye view: you don't really know where Constance starts on the German side and where Kreuzlingen stops on the Swiss side.
"Boundless thinking" - this is not only a nice motto in the Lake Constance region, but also a guiding principle in everyday life. Constance and Kreuzlingen show how this is lived. The two border towns have been working together for some time now in the environmental area, use the same pipelines for their gas supply and support each other with their water supply. They both invite to the same joint meetings, such as to the International Children's Festival, for example, or the trade exhibition GEWA. In the political field, the two towns meet again in the Borderland Conference. With this, the only institutionalized cooperation between Swiss and German communities was established along the border.
Nevertheless, the art border also transgresses boundaries itself. In 2012, photos of the 22 stainless steel sculptures taken of the art border between Constance and Kreuzlingen travelled to Strasbourg to the Council of Europe and were very well received. 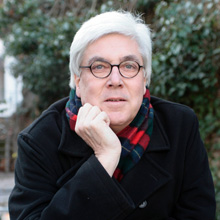 Has lived on Lake Constance since For 72 years

Cultural Tip: The Art Club in Constance repeatedly uses the subject “border” as a new theme