Bringing “special” interviews in the media

Marco and Doris Büchel with a new media project

Up until three years ago, Marco Büchel was a big success on the international ski circuit. With his many victories, he often had to give many interviews to the media and answer their questions. In this way, he became accustomed to dealing with journalists. His open and honest manner was generally well received. He now works as a co-commentator and ski expert for the ZDF.

Only recently, he started up a new family project "Sleepless Sheep Productions" with his wife Doris. "My access to different personalities – both known and/or unknown, my open communication skills and my wife's journalistic abilities were crucial factors for the start of the joint project", Marco Büchel justified his newly-born idea.

"Our goal is to interview people who are in the public eye (athletes, artists, musicians, etc.) or hold a specific position. We want to learn more about their own personal views or to capture their opinions on certain topics," according to Büchel. "We then sell the result to selected media, always in consultation with the interviewed person."

"The main thing is that we are able to put people to whom we have contacts, or often just maintain a closer relationship to, in the right light. To feature their abilities, to bring their point of view to other people, to introduce them to a broader audience. And the branch of industry does not necessarily play a role. We are open to everything, the main point is that the reader finds an interesting story to read", continued Marco Büchel. "Until now, it has been but athletes and artists in particular, but musicians and other celebrities will follow".

So far, the small family-run company has been able to enjoy placing about 3 bigger cover stories in a high-circulation glossy magazine, of which one has been exclusively dedicated to the Büchel's. In addition, major interviews in different magazines and newspapers, for example, in the Swiss Tages-Anzeiger have appeared.

The small project is still in its infancy, but the chances of success look promising! Some controversial projects are also in the pipeline! 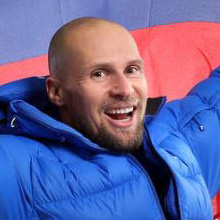 Has lived on Lake Constance since 42 years

Sports Tip: A hike along the Fürstensteig - hewn out of the rocks - in Liechtenstein with destination near Alpsitz has some breathtaking views of Lake Constance (on a clear day)