Living as a Franconian amongst Swabians, or better still in the native state of the Badener, one can still be very much at ease and feel at home. Klaus Walther, 66 years old, retired, lives in Ostrach in the southern part of the district Sigmaringen and is to be considered as a good example of successful "integration".
Already as a student in Stuttgart, his love evolved for the "Swabian sea". Whenever he had time, sailing was considered his favourite sport - to start with, as a member of the faculty crew and later in his own boat. It was, therefore, only natural that the wish to stay close to the Lake would one day have to be realised. At first, as a weekend commuter - while the necessary money as an engineer was being earned in Stuttgart at an automobile company.
Then much later as a pensioner, with a permanent place to live in the hinterland of the Lake.
The heartfelt love for the Lake has remained right up until the present day. Now, it tends to be more dry-footed by bicycle or motorbike or hiking, mostly making a stop for refreshments in one of the excellent gastronomic highlights around the Lake.
The (un)restful retirement as a pensioner soon became the reason to seek some meaningful form of employment: first, as an employee in the Automobile Museum of Fritz B. Busch in Wolfegg and as a supervisor of pupils at an all-day school in Pfullendorf. But he saw a renewed and true challenge in the function as a business developer in Ostrach – the community where he lives.
As this job had not existed in communities up until a few years ago, it was his goal to show that it very probably does make sense to place some importance on this topic, even in smaller communities - especially in rural areas.
Today, he is especially pleased that after four years of effort the municipality of Ostrach is finally "somebody" in the administrative district of urban communities which belong to Sigmaringen, so that now a further cog in the economic wheel of the four-country region of Lake Constance is turning!
Furthermore, Klaus Walther has not forgotten that leisure time and hobbies in this magnificent surrounding area of lakes, mountains and the gentle rolling hills of the nearby Allgäu region should not be neglected. Whenever time allows, he likes ”tinkering” around on the classic cars at the Automobile Museum or chauffeuring guests of the Museum in an open touring car of the 1930s through the court gardens of Wolfegg.

Motto: Give something back, which society has given you. Show the way for future younger generations, if they ask you to! 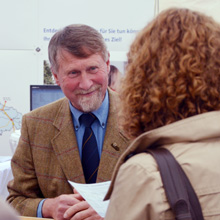 Has lived on Lake Constance since since 2004

Restaurant Tip: The “Fischerhaus” in Seefelden next to the church

Cultural Tip: The Höri peninsula with its dreamy landscape

Sports Tip: The “Jubiläumsweg” in the rural district of Lake Constance

„Anyone who wants to move something cross-border can inform himself or be advised at the IBK about possible cooperation partners or subsidies.“
Klaus-Dieter Schnell, 49

„"I would like to contribute to further developing the already well-established university, in particular by expanding the research activities of the University itself and also in cooperation with the companies in the Lake Constance four-country region".“
Matthias Premer, 49